My pharmacy told me that they can't buy mylan any more and they do not know if it is discontinued or not. Since Qualitest lorazepam was discontinued, Mylan is the only lorazepam that works (less effective than Qualitest) but works with less side effects than others (Watson, leading pharma, actavis: don't work causing serious side effects). Any alternatives, or another generic lorazepam that works ok? Lorazepam is the only sedative that works for me for anxiety and stiffness due to side effects of levothyroxine. Other medicine such as clonazepam, alprazolam (xanax), cymbalta, zoloft, lexapro, etc do not work. 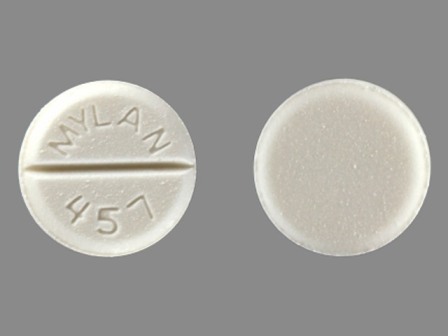 FYI, I just received a call back from Mylan after my phone call a couple days ago. They confirmed they are discontinuing lorazepam.

How come when I talked to Mylan they told me they were discontinuing them?! I talked to them on Monday? So what’s the real deal?!! Why are different reps saying different things? My doctor called pharmacy and asked for them to find Mylan there are no pharmacies at all in my area that have any. They were able to order the .5 but they told me those are being discontinued as well. Mylan is the only generic that works for me. I’m freaking out!

I talked to Mylan 6/13/18 and they told me lorazepam was on backorder and will be discontinued. Having a backorder makes no sense if you are not going to manufacture again. I'm going to call them again and see what answer they give me. Then I'm going to contact the FDA to register a complaint.

Yes please do! Ugh I’ve been taking Actavis for a week and have been so sick! Like totally zonked but still anxious! It’s horroble I can’t function! Let me know!

From the Medschat thread "Watson Vs. Mylan Generic Lorazepam Side Effects" there is a lot of discussion about this as well. When I spoke with Mylan they told me it was "being discontinued". Others were told the same but also that they were going to use up their remaining supplies to make one last batch. That's not a long term solution as who knows how long it will last in the warehouses or before expiration date.

Won't lorazepam be manufactured under any other name or brand at all? My new NP cut my dose down to next to nothing and overnight. The Lorazepam label says you have to be weaned off the stuff in order not to have side effects such as seizures. Luckily I didn't have any seizures but possibly could have. Plus the NP only gave me ten pills for a month much less than I was originally ordered four years ago,

Hello, yes lorazepam will and is still being manufactured. A friend of mine gets 90 per month and has no problem getting it filled. Best of luck to you!

Yes lorazepam is still being manufactured by other companies. A lot of people me included are upset by the fact that Mylan is discontinuing theres. Mylan has been the only brand that gave me no side effects and feel better and normal. I’ve been taking another brand Actavis that makes me feel like complete garbage! Zonked out super depressed and does nothing for anxiety. It’s a nightmare!

Hello again, you are absolutely correct! You should NOT go Cold turkey off this med, the withdrawals are pretty nasty! Insomnia and anxiety, along with a general feeling of slight depression and fatigue.. You definitely should taper the dose down..

I'd like to sue the manufacturers of Lorazepam for allowing my NP cut me cold turkey. I have been unable to sleep for an entire week now, don't fall asleep until 6 am.

I'm happy for you. What state do you live in? I need to move there, seriously.

What were your findings on Sandoz? You spoke about a new formula coming out by them. Did you ever get any feedback from them or anyone else? My pharmacist said that he looked at his Warehouse and they had Sandoz in stock with so many left. Pill markings of SZ 198 on the 1mgs. Is this the original Sandoz or something new? Was hoping you had news as this maybe what I will try next. Only problem is he said there's a red check by it which either means dc'ing or they won't buy it any longer. I've never seen those markings on a Lorazepam pill. Guessing one I didn't try. Thought I did but not with those markings. Could use your feedback. Thanks!

*Update on Sandoz*
So I called Sandoz back as the last time I spoke with them they said they were still making it yet my pharmacy was unable to get it. This time they said it was indeed discontinued. And i do believe them this time as it was also taken off their website list of produced medications.

I called MYLAN directly and was told they have discontinued LORAZEPAM. I am sensitive to fillers and hope to find a manufacturer using the same inactive ingredients. No luck so far...

I called and spoke with a CSR from Mylan Pharmaceuticals, earlier today, and I was told that they have discontinued production of all milligram lorazepam.

Yes, MYLAN also told me Lorazapam is discontinued. I'm waiting to hear from my Pharmacy about Leading Pharma. That brand has 2 of the 4 inactive ingredients that MYLAN used. If I can't tolerate that, I'm considering switching back to Valium. Lorazapam worked better for me than Valium, but if Leading Pharma makes me sick with their inactive ingredients, I won't have much of a choice......

I got a call from mylan today and she said lorazepam was discontinued. A few weeks ago, another staff told me it was back-ordered but they did not decide the release date asking me to contact them later for the release date. But now they said it is discontinued. Why do they have different information? I don't know whom to trust. I sent them inquiries again to make sure, but if it is discontinued, I am in big trouble as Qualitest was discontinued earlier that works well for me and mylan was OK but other manufacturers such as watson, leading pharma do not work at all causing bad side effect. I live in LA and in my area, pharmacies sell only watson, leading pharma, actavis, or sandoz that do not work for me.

In the same boat! I’m on the other side of the country! Mass. All we have is leading and Actavis both garbage. My paharmaxy ordered me all they could for Mylan after that which will probably only be a few months, I’ll find out next week. I will be screwed! I don’t understand why they are discontinuing. :(

You would think they'd just post it on their website and delete that they're not making it. Most certainly would have helped a lot of us from calling or emailing them. If you look out there now it shows they still make it. At least Sandoz doesn't show they're making Lorazepam anymore.